Every Easter morning in Florence, an ancient rite is revived and thousands of viewers pack the piazza to witness the spectacle of Scoppio del Carro, Explosion of the Cart.

Between the Duomo and Baptistery, a Renaissance cart laced with explosives awaits its spark. About 11AM, a dove flies out from the high altar, ignites the cart, and it booms, sizzles, sparkles, and whirls for about twenty minutes. While the cart doesn’t actually explode, the fireworks attached to it fill the piazza with fiery brilliance, smoke and excitement. After the finale, where the top spins, flags pop out with super-loud bangs, and fireworks explode overhead, the cart is quiet. Then viewers, most of whom waited over an hour for this intense but brief extravaganza, work their way out of the throng to go to their next Easter event, typically Sunday Mass or a big family lunch.

This year, Larry and I went with friends who had never witnessed the Scoppio. In Cortona, it poured overnight and was still drizzling when we caught the train at 8:24AM. Happily, the umbrella we carried warded off rain in Florence and the day turned warm and sunny.

We arrived too late to watch the parade preceding the Scoppio, but have seen it before. The 30-foot-tall, painted and gilded Renaissance cart — in use for over 500 years — is pulled through Florence by a team of white, oxen-like Chianina cows, one of the oldest extant cattle breeds in the world. The festooned cows and antique cart are accompanied by musicians, soldiers, dignitaries and townspeople, all in 15th century costumes. Once the cart is in place, a procession of clergy and dignitaries ceremoniously enters the church for a private Mass. Soon singing wafts from the open church doors and bells ring in the Giotto bell tower, while men in a crane basket attach the last fireworks to the tall cart. As the Mass ends, the dove flies out (on a nearly invisible wire), ignites the cart, and the explosions begin!

Following the Scoppio, we stopped for coffee at Gilli’s, a nearby bakery-restaurant in business since 1733. We were delighted to get to see the still-decorated cows pulling the sooty cart back down Florence’s streets. It will be cleaned, fixed up and made ready for next Easter, when it will “explode” all over again.

The Scoppio del Carro dates to 1097, during the First Crusade, when according to tradition, a Florentine soldier was the first to scale the wall in Jerusalem to take back the city for Christianity. To reward his bravery, his commander gave him three stones (flints) from the Church of the Holy Sepulcher. Each Easter thereafter, a “holy fire” was started from these stones and carried via an oxen-pulled cart through the streets to light the candles in Florentine churches. By the 15th century, the celebration had taken its current form. We were told the holy stones are still carried in the Scoppio procession, but today’s spectacle looked like sophisticated pyrotechnics to me. I’ve seen it a few times and am still shocked by how loud it is!

Two modern observations: This year, more than ever, thousands of arms were in the air holding phones to take photos and blocking others’ views. Fortunately, I’m taller than most Italians, so was able to get a couple good shots. But I didn’t keep my arms up. Second, a friend observes that unlike many Christian traditions that have pagan roots, the Scoppio del Carro started as a Christian ritual that now seems quite pagan.

After coffee, we strolled in the sunshine across the Arno and enjoyed Easter lunch at Trattoria i’Raddi, one of our favorite local spots south of the river.  All in all, a memorable Easter Sunday, celebrating the Risen Christ in a strange, but traditionally Italian way. 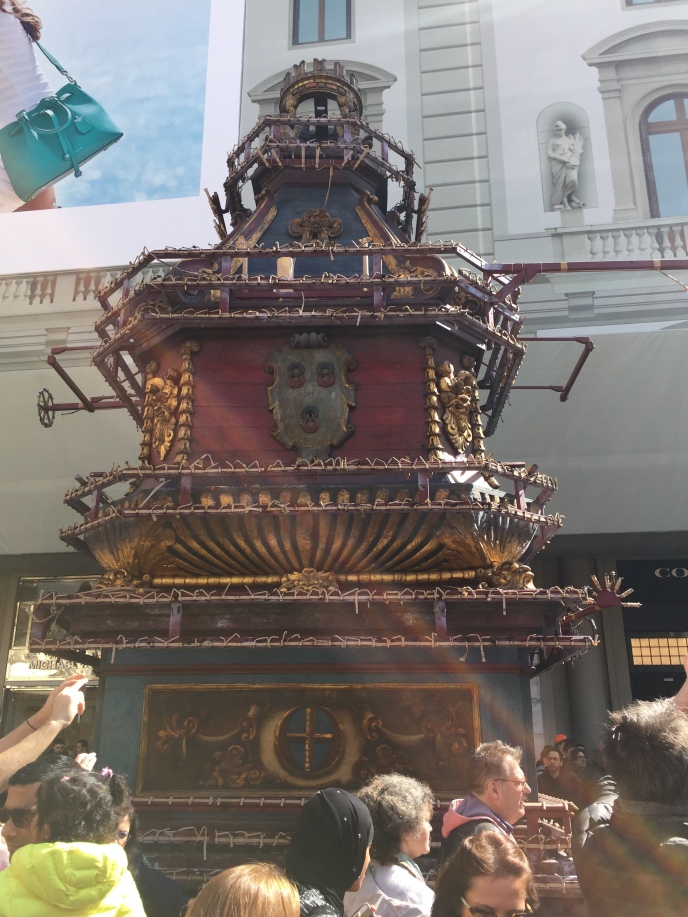 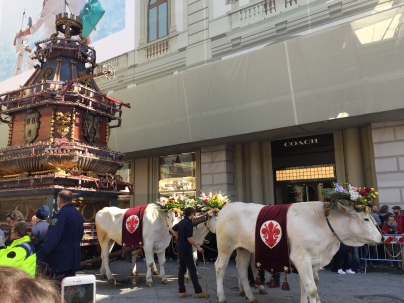