Each year on January 6 — Epiphany — Christians worldwide remember the wise kings who followed a star over two thousand miles to worship and bring gifts of gold, frankincense and myrrh to the baby Jesus.

This year Epiphany fell on Sunday. Larry and I arrive early at the small church where we have been attending Mass for over two years. We are still anonymous, quite obviously the only non-Italian regulars. We don’t take the Eucharist because we are not Roman Catholic, we stand respectfully when many kneel, and we quietly blunder through the readings with our awkward Italian. When Mass ends, we andate in pace, go in peace, nodding to people whose faces we recognize but names we do not know.

Our tiny church is a part of Le Celle, an ancient monastery two miles outside Cortona where Francis of Assisi lived off and on and, in 1226, wrote his last testimony. No matter how often we visit, the honeycomb of stone rooms clinging to the steep hillside astonishes me. These “cells” once housed two hundred monks; today fewer than ten brown-robed brothers maintain Le Celle as a prayer and retreat center. Francis’ original cave-room is still here. His bed, a wooden board about 18 inches by 5 feet, demonstrates his small stature and unassuming character. Francis — who owned nothing and was dedicated to caring for the poor and marginalized as he imitated Jesus’ example — became one of the most influential individuals in history.

This morning as we wait in a back pew, a few other early-birds chat among themselves. The priest comes out to greet them personally. Then he walks back and introduces himself to us. Fratello Daniele, he says, as he takes my hand in his. “Piacere,” pleasure, I reply and introduce myself. Larry says, “Sono Larry, come Renzo,” I’m Larry, like Renzo. “Larry” is an unfamiliar name to Italians; the Italian diminutive for Lorenzo is Renzo. When Father Daniele asks where we are from, Larry says we are from Chicago, but we are residenti Italiani, Italian residents, living in Cortona.

Father Daniele begins Mass with a welcome, as he often does. But today he specifically welcomes “i nostri amici da Chicago,” our friends from Chicago. People turn and smile warmly. When we “pass the peace,” some come across the aisle to shake our hands. After the service ends, many say farewell and wish us buon anno, a good new year. A few say their names.

I sense this Epiphany Sunday is a new beginning for us. With the gift of a personal welcome, it seems we will begin to worship with the community, not as outside observers. Sometimes it takes a long time to be accepted into a community, especially for a foreigner, and sometimes it never happens. But, in our small church in this tranquil and spiritual monastery, we finally feel welcomed. Now, it’s up to us to establish deeper friendships… and to extend the gift of welcome to others. 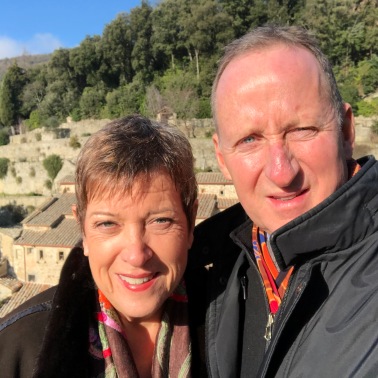 One thought on “Epifania… A New Beginning”