In early March, florists, garden centers, and grocery stores all over Italy are full of bright yellow puff-balls with a delicate, sweet aroma — Mimosa, blossoms of the Acacia tree and official flower of Women’s Day in Italy. To celebrate, always on March 8, women invite one another to lunch or dinner and exchange small Mimosa bouquets.

For Women’s Day 2018, I had lunch with friends at Canta Napoli, just outside our hometown of Cortona. We indulged in fried calamari and seafood pastas, and sipped crisp, chilled Greco di Tufa wine, toasting the accomplishments, contributions and importance of women. Each of us shared about specific women who had influenced and inspired us. Not surprising, most important were our mothers.

The best story was about a nun, the school teacher of Leisel, who years later called Leisel saying she’d escaped the convent by climbing over the wall. Then, years later yet, called to say she was getting married — to a millionaire. The former nun rode away from her fairytale wedding in a Silver Cloud Rolls Royce!

To celebrate, Liz brought a huge basket of lovely handmade mimosa bouquets, each wrapped in a lacy doily and tied with ribbon. Sheryl brought Venchi chocolate eggs, with mimosa spring decorations. The restaurant served us decadent desserts, compliments of the house, even though we pleaded that we were too full. Not a morsel was left!

In Italy, where food is paramount and family recipes are passed on through generations, there’s even a traditional Women’s Day Cake, decorated with teeny cake cubes mimicking the mimosa flower. https://lacuochinasopraffina.com/en/…cakes/mimosa-cake…italian/19111

Women’s Day is international, in origin and now in practice. It was first observed in 1909 in New York City, and in 1910 in Denmark. In 1914 in Germany, Women’s Day was dedicated to women’s right to vote, which was not won until 1918. Soon, Women’s Day became official in England, Russia, Austria and is now called International Women’s Day. https://en.wikipedia.org/wiki/International_Women%27s_Day

I believe women are the glue of most societies, and never more true than in Italy where family is the most important unit. Italian women hold the families together, raise the children, feed the fathers and grandfathers, make the decisions regarding their family, and teach family members to be respectful, hardworking, clean and honest. For twelve years in Cortona, I’ve observed the women. To me, most Cortonese women seem dignified and never idle. This ancient culture is held together, not by the politicians or business leaders, but by the women.

I left our lunch carrying my mimosa bouquet, delighted to be a woman, and thankful to celebrate this day with amazing women who, like me, have chosen to live in Italy. 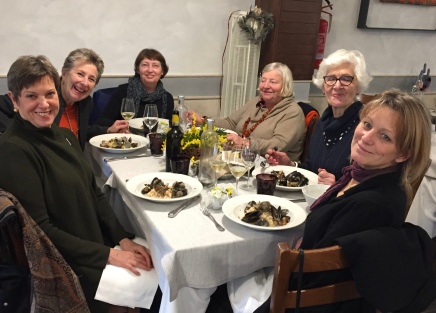 Please watch for my upcoming book, Renovated, about following our dream to live in Italy and having the earth shift beneath our feet. That summer, life was more exciting, stressful, revealing and transforming than we ever expected.

Now, after twelve years in our ancient stone farmhouse on a hillside of olive trees, we have become better partners and friends, more appreciative of one another — and of the country we’ve chosen to call home.